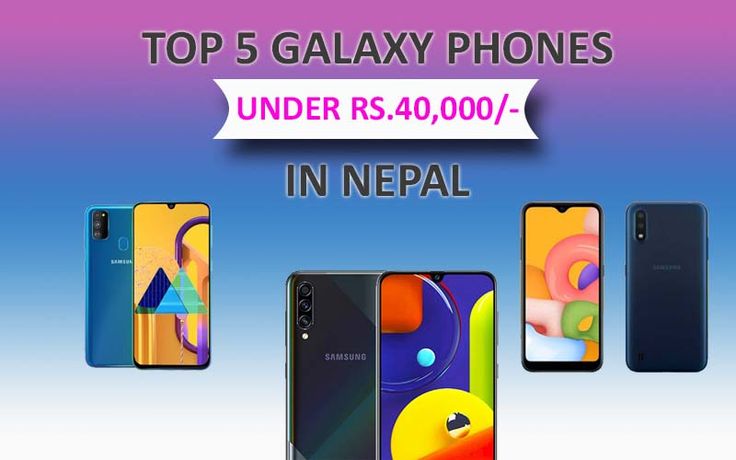 Are you in search of Samsung Galaxy Mobile Phones under 40000 in Nepal??

Samsung mobile company is one of the best mobile manufacturer in the smartphone market world. It is also one of the world’s most valuable and technologically advanced consumer-technology brands, competing with Apple and Google likes.

Samsung mobile phones are considered to be one of the best devices as they come with the latest and highest specifications and features.

But, with the company currently having a wide range of choices under different price bands, you’re limited only by your budget. Here we have selected some of the best Samsung mobile phones and give a piece of detail information about those smartphones.

Some of them come under the category of expensive smartphones, some have great performance and some are the best budget phones.

Samsung Galaxy mobile phones are doing great in the smartphone business. Samsung Galaxy M31 is the upcoming budget smartphone of February, 2020 in Nepal and India. It is expected to be powered by Octa-Core Samsung Exynos 9611 with a touch screen display.

Galaxy M31 runs on One UI 2.0 android 10. It tripped to be a dual-SIM smartphone that will accept Nano-SIM and Nano-SIM cards.

This phone seems to come up with a QUALCOMM Snapdragon 665 SoC, along with 6GB of RAM. This smartphone supports fast charging.

Release Date and Price in Nepal

Samsung Galaxy A01 comes up with the latest Android 10.0 operating system. It is a new budget smartphone from the South Korean Tech Giant. This smartphone sports a waterdrop-notch and a dual rear camera setup at the back.

The price and the availability of Samsung Galaxy A01 are not announced yet. This smartphone will be available in Black, Blue, and Red color. It has an infinity-V display with a slight chin at the bottom of the screen.

The new Samsung Galaxy A50s comes with a bigger display of 6.4 inches and a resolution of 1080 X 2340 pixels with Super AMOLED capacitive touchscreen.

This phone weighs about 186 grams which is quite lite. The SIM is Dual (Nano-SIM, dual stand-by). The Samsung Galaxy M20 comes with 6.3 inches display with 1080 x 2340 pixels resolution.

Let’s check other specification of the Samsung Galaxy M20 by Samsung.

This year, the Galaxy A series got even more diversified. Samsung Galaxy mobile phones has already introduced the Galaxy smartphones A10, A20, A30, A40, A50, A70 and A80 with a focus on new AMOLED screens and premium camera capabilities.

The Samsung Galaxy A50 is a smartphone packed with as many cool specs as possible. Start with the sleek design with the gradient paint job, switch to 6.4 “Infinity-U Super AMOLED screen with a premium fingerprint scanner underneath.

It is also powered by a strong Exynos CPU, and a triple camera on the back. It’s also hard to miss the big battery and the latest Android Pie with the clean One UI.

So these are the list of samsung galaxy mobile phones under 40000 in nepal.

AI deletes the nudes for you – Kelsey Bressler