Roxy and Judith starred in Pokémon Masters EX Friendship Day and remain two of the most powerful trainers to ally with.

Pokémon Masters EX is one of the mobile titles of the Japanese franchise that can be enjoyed on mobile devices and in which you experience different stories from the narrative universe accompanied by several of the characters that have been part of all the game’s plots. And two of the trainers you should consider fighting alongside them are Judith, the fighting-type trainer for Galar in Pokémon Sword , and Roxy, the main rival in Pokémon Sword and Shield .

The two fighters of the eighth generation were the main ones of the historical event A very sweet story , which was part of Friendship Day and filled Passio, the place where the title takes place, with content. It also brought many rewards and cosmetics such as Sabotage Movecandy (3 stars) and Attack Movecandy (4 stars).

Are you looking for new companions for your team to make it invincible? Don’t worry, because this couple will strengthen your team and with them you can kill anyone. It’s over to fall defeated because you don’t have a good combination between your pokémon.

How to unlock Roxy and Judith in Pokémon Masters EX

To unlock both characters of season 22 you have to face Team Heart-Break first, something that allows you to unlock sweet tickets and sweet tickets, with which you later buy various cosmetics and special items, such as the Roxy Letter and the Letter from Judith , which contain special chapters of each one of them.

The good thing is that, during the event, whenever you fight together with Roxy and her Meawile and Judith and her Vanilluxe (or teams that contain ice and steel) you will get x1.6 candy bucks , which will make it quite easy to farm all the items of the event. Keep in mind that between the combats and challenges that you have to face

In case you need more information about the creatures of both trainers, we provide you with all the features and information available:

It is a steel type creature that can fulfill the role of sabotage . His stats at max level are:

In the set of movements, the most interesting are Iron Head , with 3 bars, with 92 power and which has a 30% knockback; Steel field , with 2 bars, 2 uses and that boosts the attacks of its type by 50%;  Grunt , attack in an area of ​​1 bar and lowers the opponent’s attack by one point; and Iron Defense , which increases the special defense by two points. Best of all, this creature has mega evolution, which will allow us to multiply its statistics until the end of the fight.

It is an Ice type and is focused on the support role , although it is very weak to the Rock type. His stats at max level are:

The most recommended attacks are Impress , with 12 power, a cost bar and that can push the opponent back; Potion , which restores 40% of life and has only two uses; Icicle , which does two to three attacks at 15 power and costs two bars; and Share , which increases the user’s attack, special attack, and speed.

His best passive is Hail, which imposes this weather upon entering combat, Hearty Hail , which increases Defense and Special Defense by 30% while hailing; and Snow Protection , which protects the user during hail. 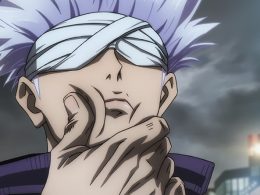 Poor those who think that the spokon -sports- genre in anime cannot give real life lessons. You just have…
byDavid

What used to be freaks and geeks , today has become one of the most followed cultural phenomena on the…
byDavid